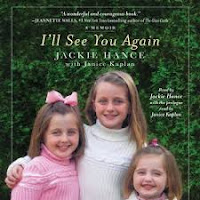 In July of 2009 a horrific car accident took place on the Taconic State Parkway in New York. Anyone watching the news reports would be shocked and appalled at the heartbreaking tragedy. Lost in the accident were four children, and three adults. Three of the children were sisters and they were also the author’s, Jackie Hance’s, only children. The girls, Emma, Alyson and Katie, were eight, seven and five when they lost their lives.  What was a sad and devastating news report for most of us was Jackie’s ultimate nightmare.  We learn from Jackie’s memoir how an ordinary woman lived through and reacted to what can only be unimaginable for so many of us.

Jackie’s story is not sugarcoated, nor does it contain superhuman details on how to recover from tragedy.  It is just an honest look at what the writer went through. She questioned her faith, her marriage, and her will to live. Friends and family helped out, but at the end of the day nothing made her feel better. Happy gatherings plagued her with guilt, trips to the grocery store bombarded her with lost memories; and birthdays and holidays became cruel.

Ultimately, I kept waiting for the happy ending. I wanted so badly for Jackie to say her daughters returned.  Of course they don’t, but we get to see Jackie begin to shape a new life for herself that still keeps her daughters’ memories alive. Many will find Jackie’s story comforting in that it reminds us that we are capable of moving on from tragedy even when it seems there could never be a way