New books in the Children's Department

Z is for Moose by Kelly Bingham-A is for apple, B is for ball, C is for cat and D is for moose. Wait, that’s not right! In this fun alphabet book, Moose is so anxious for his letter to show up, that he arrives a little early. When they decide to pick Mouse over Moose, Moose is not happy. The rest of the alphabet is in peril and it’s up to Zebra to save the day. This is a good book for preschoolers, especially in a small group or in a one-on-one setting. (J ABC Bin)

Wolf Won’t Bite! by Emily Gravett-Three circus pigs chase down and capture a big bad wolf. They can make him stand on a stool, ride him like a horse or make him jump through hoops, but he won’t bite. Or will he? (JE Gra)

Lola & Tiva: An Unlikely Friendship by Juliana, Isabella and Craig Hatkoff-Tiva has always wanted a puppy but because her family lives on a nature conservancy in Kenya, dogs aren't allowed. However, Tiva gets a different type of pet-a young black rhino named Lola who wandered off from her blind mother. This beginning reader is a wonderful story of friendship. (J Rea 3 Hat)

Up Cat by Hazel Hutchins-In this simple concept book, children are introduced to the word "up." Repeated use of the word is used on each page as the reader follows a cat throughout it's day (wake up, leap up, etc). The simple illustrations and text make this a perfect book to read to babies and toddlers. (JE Hut-this book is located in the ABC cubes) 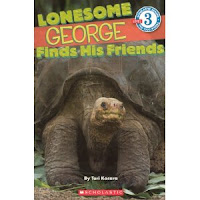 Lonesome George Finds His Friends by Tori Kosara-Lonesome George is a Galápagos tortoise who lives on the Galápagos Islands. Sometimes it gets lonely, but there are lots of animals on the islands who keep George company. Along the shore, there is a young Galápagos sea lion and a Sally Lightfoot crab. In the water live stingrays, sharks, squids, sperm whales and dolphins. There are also lots of birds-the blue-footed booby, the Galápagos frigate bird, the Galápagos finch and even Galápagos penguins. With so many other animals on the island, it's hard for George to remain lonely. This beginning reader has beautiful photographs which will get readers excited about learning about a new place (J Rea 4 Kos)

Chicken, Pig, Cow's First Fight by Ruth Ohi-Chicken, Pig and Cow are back in Ruth Ohi's picture book series. These best friends have never had a fight. One morning Girl builds an impressive city, but Chicken thinks something is missing and creates a chicken statue. Pig is just a little too excited and goes zooming through the city, knocking down Chicken's statue. Chicken is mad at Pig for not being careful and Pig is mad at Chicken for being in the way. Will these two friends settle their differences? This is a good book to introduce conflict resolution to preschoolers. (JE Ohi) 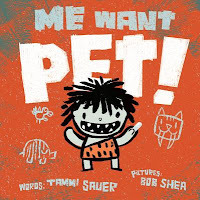 Me Want Pet! By Tammi Sauer-Every child wants a pet and that doesn’t exclude Cave Boy. He searches high and low for the perfect pet, but the Woolly Mammoth is too big and Papa is allergic to the saber tooth tiger. Will Cave Boy find a pet that the entire family can agree on? (JE Sau)

Posted by Samantha at 3:42 PM No comments: