New Jersey no longer sends out the state tax forms to libraries. NJ Tax booklets and forms were scheduled to be mailed during the week of December 31, 2012, to every New Jersey household that filed paper returns without using tax preparation software last year. If you used an accountant, online tax software, or company such as Jackson Hewitt or H&R Block, then you might not get the NJ state tax booklet this year.

If you have not received your booklet by the third week in January 2013, or if you do not expect to receive a booklet and need to obtain one, please see go to the NJ State Taxation website. 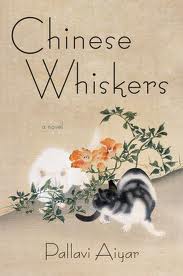 While Chinese Whiskers can be appealing to both cat lovers and readers interested in Chinese socioeconomics and politics, I really feel it mostly appeals to feline fans. Two cats, the main characters, each speak to us in their point of view about their lives and experiences closely preceding the 2008 Beijing summer Olympic Games. Soyabean and Tofu begin life under drastically different circumstances, but come together when adopted by a foreign family living in China. Tofu begins life as a stray cat that lives in a dumpster. Soyabean’s life begins living with a grandmother who adores cats, but wishes to adopt him, her newest kitten, out. Once they come together they become caught up in exposing a poisoning scheme, and seeing that those responsible are brought to justice.

The tale touches upon the unfairness of the class structure in China. Tofu is rounded up to be euthanized when a disease believed to be caused by cats sweeps Beijing. When she is able to escape, she becomes acquainted with several poor workers who are hungry and making little money building the Olympic villages. Tofu relates to this man and wishes there was something she could do to stop injustice dealt to the poor by the hands of the extremely wealthy. Tofu and Soyabean both take down two rich, conniving men who threaten the lives of millions of cats in China; therefore, bringing hope to the impoverished people who constantly are brought down by rich companies and manufacturers.


Although the cats spend most of the book dealing with these problems, I still think it appeals more to cat lovers. Being someone who loves cats, it was a little hard to think too seriously about the story because it was told through the eyes of cats. Other bits cat lovers will enjoy is that the cats’ intense interest in the poisoning scheme involves cat food, and that there are cat gangs that roam the streets. Who couldn’t smile at a “devious” gang of cats whose main worries revolve around food? I recommend this book to anyone looking for a tale of an unlikely hero.

Kelly’s Book Review
Posted by Christine at 11:27 AM No comments: