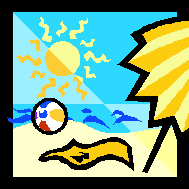 The following is list of suggested summer reading titles for 7th graders. This list was compiled by Children’s Outreach Librarian Samantha Tai at the Vineland Public Library. All titles are available at the Vineland Public Library. Please note that students are not required to read a title from this list. They may pick any title that is deemed grade appropriate. Please see a librarian for the location of the following books or for other suggestions. To see the actual assignment, click here.

90 Miles to Havana by Enrique Flores-Galbis
When unrest hits the streets of Havana, Cuba, Julian's parents must make the heartbreaking decision to send him and his two brothers away to Miami via the Pedro Pan operation. But when the boys get to Miami, they are thrust into a world where bullies seem to run rampant and it's not always clear how best to protect themselves. (J FIC Flores-Galbis)

Al Capone Shines My Shoes by Gennifer Choldenko
In the sequel to Al Capone Does My Shirts, Moose Flanagan, who lives on Alcatraz along with his family and the families of the other prison guards, is frightened when he discovers that noted gangster Al Capone, a prisoner there, wants a favor in return for the help that he secretly gave Moose. (YA FIC Choldenko & AUD CD YA FIC Choldenko)

All the Lovely Bad Ones by Mary Downing Hahn
After learning their grandmother’s inn is haunted, Travis and Corey decide to do some “haunting” of their own. Before long, their supernatural pranks have tourists flocking to the inn. They soon learn that they aren’t the only “ghosts” at the inn. Their pranks have awoken the local ghosts who refuse to “rest in peace.” (J FIC Hahn)

City of Ember, The by Jeanne DuPrau
The city of Ember was built as a last refuge for the human race. Two hundred years later, the great lamps that light the city are beginning to flicker. When Lina finds part of an ancient message, she’s sure it holds a secret that will save the city. She and her friend Doon must decipher the message before the lights go out on Ember forever. If you read this book, make sure you also watch the movie based on the book. (J FIC DuPrau & J AUD CD FIC DuPrau)
Also by Jeanne DuPrau: The People of Sparks; The Prophet of Yonwood; and The Diamond of Darkhold (Same as above)

Claudette Colvin: Twice Toward Justice by Phillip Hoose
Nine months before Rosa Parks triggered the bus boycott in Montgomery, Alabama, by refusing to give up her seat to a white passenger, 15-year-old Claudette Colvin let herself be arrested and dragged off the bus for the same reason. Colvin played a central role in the city’s civil rights drama, but her story has been largely lost to history. (YA B Colvin)

Countdown by Deborah Wiles
The fearful events of the 1962 Cuban Missile Crisis are witnessed by 11-year-old Franny, who finds her life and perspectives changing throughout the course of a week that is also marked by difficult family issues. (YA FIC Wiles)

Faith, Hope and Ivy June by Phyllis Reynolds Naylor
Ivy June Mosley and Catherine Combs participate in a school exchange program where each girl spends two weeks in the other's home and school. Ivy June, who lives in the mountains of Kentucky where most of the residents have no phone service or bathrooms and many of the men work in the coal mines, spends two weeks in Lexington at Catherine Comb's middle class house and goes to her private girls’ school. The two overcome many stereotypes and become very good friends. (J FIC Naylor & J AUD CD FIC Naylor)

Honus and Me by Dan Gutman
When Joe Stoshack gets a job cleaning old Miss Young's attic, he's not too happy about it. The place is filled with tons of worthless trash, and he's only getting paid $5 for hauling it out. Suddenly Joe finds a little piece of cardboard. He's holding the world's most valuable baseball card. Joe is rich–really rich–but it's more than that. Suddenly, Joe is face-to-face with the player on the card. He’s able to travel through time with one of the greatest ballplayers who ever lived. If you have a favorite baseball player, try one of Dan Gutman’s other Baseball Card Adventure books: Jim & Me; Satch & Me; Abner & Me; Shoeless Joe & Me; Mickey & Me; Babe & Me; or Jackie & Me (J FIC Gutman)

Maximum Ride series by James Patterson
Meet 14-year-old Maximum Ride, or Max for short , and the rest of her flock, Fang, Iggy, Nudge, Gasman and Angel in book one, Maximum Ride: The Angel Experiment. Max and her flock are just like ordinary kids, only they have wings and can fly. After the mutant Erasers abduct Angel, the youngest member of their group, the "birdkids," who are the result of genetic experimentation, take off in pursuit and find themselves struggling to understand their own origins and purpose. (YA FIC Patterson)

Out of the Dust by Karen Hesse
In a series of poems, fifteen-year-old Billie Jo relates the hardships of living on her family's wheat farm in Oklahoma during the dust bowl years of the Depression. (J FIC Hesse, JPB H & J AUD CD FIC Hesse)

Reckless by Cornelia Funke
Jacob and Will Reckless have looked out for each other ever since their father disappeared, but when Jacob discovers a magical mirror that transports him to a warring world populated by witches, giants, and ogres, he keeps it to himself until Will follows him one day, with dire consequences. (J FIC Funke & J AUD CD FIC Funke)

Red Pyramid, The by Rick Riordan
Egyptologist Dr. Julius Kane accidentally unleashes the Egyptian god Set, who banishes the doctor to oblivion and forces his two children to embark on a dangerous journey to save him. (J FIC Riordan)

Ruins of Gorlan, The by John Flanagan
When 15-year-old Will is rejected by battleschool, he becomes the reluctant apprentice to the mysterious Ranger Halt, and winds up protecting the kingdom from danger. This is the first book in the Ranger’s Apprentice series. (J FIC Flanagan)

Search for the Shadowman by Joan Lowery Nixon
Twelve-year-old Andy Thomas isn’t thrilled with his teacher’s assignment to explore family history. But when he starts asking questions about his ancestors, he’s surprised to discover a black sheep named Cody Joe Bonner. No one wants to discuss what happened in his family’s past, but Andy is determined to continue his investigation. Will his investigation hurt those he loves or help them realize it’s never to late to seek justice? (JPB N)

Throne of Fire, The by Rick Riordan
In the sequel to The Red Pyramid, Carter Kane and his sister must prevent the chaos snake Apophis from breaking free in a few days' time or the world will come to an end. To have any chance of battling these Forces of Chaos, the Kanes must revive the sun god Ra. (J FIC Riordan)
Posted by Samantha at 2:54 PM